Shadow Lake Village, located in the River Plaza section of Middletown, is an age-restricted, gated community made up of townhomes built upon the banks of Shadow Lake, an 80 acre, 3-mile long body of water. Shadow Lake is a man-made lake created in 1928 by damming the Nutswamp Brook and flooding the valley and drains to the Navesink River. The Lake has a history of being well known for recreational boating and fishing for its residents and the public. The NJDEP Division of Fish and Wildlife stocked the lake with trout until 2014.Due to a variety of factors the Division of Fish and Wildlife no longer stocks the lake; some of these factors are but not limited to: lack access to the lake, low angler opening day counts, the large size of the lake, and close proximity to other bodies of water that are stocked. For more detailed information why the lake is not stocked currently you may contact NJDEP Division of Fish and Wildlife directly.

Around 2010, Shadow Lake Village residents formed a group known as Save Shadow Lake; to bring attention to the lake’s deteriorating condition and a fear that Shadow Lake will be lost to siltation and invasive growth including the Eurasian Watermilfoil and Water Chestnut. The Township conducted several meetings with the public, and NJDEP to develop a plan to address the concerns. In 2007, a Township plan to dredge the lake was rejected by NJDEP due to the logistical requirement of where to store the spoils that were cited as having unacceptable levels of naturally occurring arsenic. When the Township re-submitted the permit application, with a new plan to store the spoils, it was approved by NJDEP.

In 2012, with NJDEP permit in-hand, the Township Committee approved a $3.8M bond ordinance to dredge the entire 80-acre lake to “free the lake from silt and algae that have gathered at its bottom for many years and rendered it shallow and unusable for recreation” (Source: “Shadow Lake Dredging One Step Closer,” Middletown NJ Patch, Sue Morgan, January 6, 2012). However, due to financial constraints Shadow Lake was never dredged. The Township continues to seek alternatives to dredging in order to save Shadow Lake from being lost forever.

The Township developed an Aquatic Management Plan to improve water quality at Shadow Lake. A combination of alternative methods have been utilized by the Township including hydroraking during the summer months, regular aquatic herbicide treatments in the fall months, and floating islands.

Hydroraking is a floating barge with a backhoe mounted on it with several different rake attachments. The rake attachments remove weeds, silt, and other organic debris that have collected at the bottom of the lake (Source: “Shadow Lake Hydroraked,” Atlantic Highlands Herald, August 2, 2013). Four acres of Shadow Lake were hydroraked in 2013 and 2014 to remove the invasive growth.

Aquatic herbicide treatments to manage the Water Chestnut are scheduled regularly during the Fall months.

Floating islands are used to improve water quality and overall ecological health of the water body, and have become widely accepted as a “highly versatile water quality stewardship Best Management Practive (BMP),” (Source: Floating Wetland Solutions Proposal dated August 25, 2016). Floating Islands are planted with native plant growth, and encourage diverse plant growth above and below the waterline and work to purify the water. In 2016, two 8’ x 15’ floating islands with 300 plugs of native plants were deployed on Shadow Lake and are still in use. Today, the floating islands are still in use. 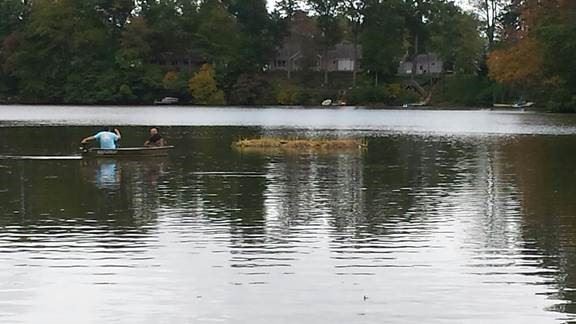 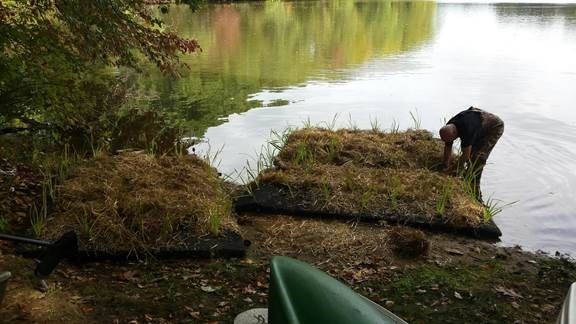 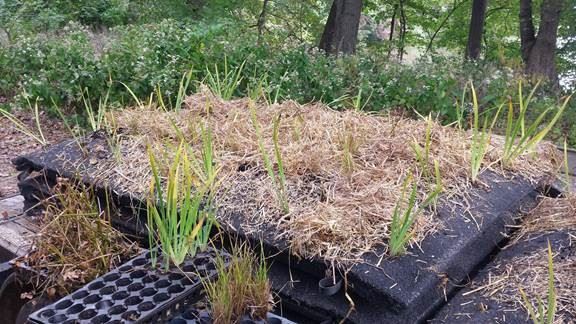